Lately every time I hear two particular songs on the truck radio, one particular person comes to mind. My first big love. You know what I’m talking about. The one you’ll never forget. Ever. No matter how hard you try. No matter how many times you tell yourself you’re a fool to feel this way. A foolish young girl then. An equally foolish old broad now.

I’ve also learned recently that time has no affect on this kind of love.

Chances are, I might never have realized just how big a deal this guy was to me had I not bought a truck. And had that truck not come loaded with six-months worth of Sirius Radio. And in case you’re wondering, six months is just long enough to become addicted to the billions of stations Sirius carries. You name it; they’ve got a station for that. Let’s just say I’ve listened to a lot of good music over the past five years.

Last summer I discovered a station called The Bridge. This station features mellow classic rock and ‘70s folk rock. There’s a lot of acoustic stuff from guys like Jackson Browne and James Taylor. I had no idea I liked their music so much until I started tuning into The Bridge.

In addition to discovering a ton of fabulous old-new music, I’ve also taken a few trips back to another era in my life, all the while driving in this one. It was bound to happen. I’d hear a song or two that reminded me of him. Ones that would fill my spirit with doleful lamentations and serve as poignant reminders that even the passage of time and tornadoes, the heart simply remembers what the head discards with yesterdays old love letters.

The first song, the happier memory-maker of the two, is Paul McCartney’s Maybe I’m Amazed. I say this one is happier only because this song was from the beginning of our affair with love. Picture this. A darkened room lit only by a single candle stuck into the top of a Chianti bottle, the kind with the fiasco basket, with rivers of wax dripping down onto the table. This was a classic ‘70s mood-setter. Now tune your ears to this. He puts Maybe I’m Amazed on his record player and says, “This song is how I feel about you. I think of you every time I hear it.” Nice. I was intoxicated. Not only by his earnest declaration of love, that was beyond anything I could have ever imagined, but by the Chianti. I was seriously drunk. Which explains why I thought something like this, “I must be amazing if a guy as cute and popular and sexy as him, feels this way about me. And he played the piano just like Paul McCartney. How did I get so lucky?”

So Maybe I’m Amazed is the happy ‘in the beginning, everything is new and wonderful, once upon a time fairytale’ song.

And then there’s Carole King’s It’s Too Late. Picture this. It’s the middle of summer. It’s stinking hot and humid in Northwestern Ontario. I’m pregnant with my first big love’s child. And we’ve split the sheets. As in gone our separate ways. Or more accurately, he’s gone touring and my heart has gone in about a million separate ways. Now tune your ears to this. The phone rings. I pick it up. Hear my first big love’s voice on the other end. My heart momentarily lifts to glorious angelic heights. “He wants me back,” I hopefully (and foolishly) think. Then he says this, “I thought of you today. That Carole King song, It’s Too Late came on the radio this afternoon.” I don’t remember a word he said after that. I just remember putting down the phone and lying in the middle of my bedroom floor on my back, staring up at the ceiling. And bawling my fucking brains out. My life was over. Of course, it wasn’t. It just felt that way.

Eventually I picked myself up off the floor and started the life that would lead to the life I have today. One filled with music. And love. And love of music.

There you have it. Drive time. Two beautiful piano songs accompanied by two bittersweet memories. 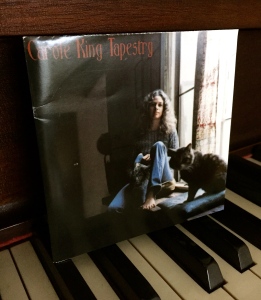