In front of my blue couch in my writing room.

I must confess.  I am a Couch Potato.  In my defense, I come by my CP status honestly.  Ma and The Old Man were also big CPs.  That was back in the day when this activity, or lack thereof, was considered an acceptable pastime.  Before there was an actual term for it.  Pre-guilt era.  Before I thought I should be making better use of my time.  By accomplishing stuff.  Getting things done.  Being a doer.  Not a layabout.  Back when it wasn’t synonymous with sloth.  Laziness.  Wasting time.  Or worse yet, my life.

There was a time when a potato was just a potato.  Mashed, baked or fried.  Served hot with vegetables and meat.  And a couch was just a couch.  A place to sit and put your feet up. Take it easy.  Stretch out.  Lie down.  Languish. Unwind and relax. Rest your weary bones.  Catch forty winks.  A little catnap.  Doze or fall into a deep sleep.

For the record, I like my potatoes mashed, baked or fried.  And I love couches for all the reasons I’ve just described.

Little back story.  Ma loved couches long before I ever came into the picture.  We had more than a few during my life at 204.  But the first one had to have been my all-time favorite.  This seems to be the case with many “firsts” in life.  The benchmark for all that follows.  This particular first was a luxurious deep maroon embossed velvet, worthy of being called a “sofa.”  Comfy plush cushions with kid-sturdy wide arms and a head-resting back.  Designed for comfort and built to last.  It could accommodate a family of six easily.  Photographically perfect for portraits of children.  They just don’t make couches like that any more.

Ma asleep on the turquoise sectional.

After Ma’s mania for all things maroon passed, we moved into her turquoise phase of the sixties.  With that came the modern turquoise sectional, which Ma kept covered in plastic for the first year we had it.  This served not only to preserve the pristine newness of the couch but it also appeared to have been a peculiar part of the decorating trend of that era.  There was a spate of plastic covered furniture across the cities and towns of North America.  According to black and white photographic evidence, it seemed to be all the rage.  Why else would so much plastic have appeared in so many family photos?  What else could have accounted for this phenomenon? It was as much a part of the domestic decorating landscape as pole lamps and shag rugs.

Cuddle time on the brown couch with the floral coverlet.

After the plastic covered couch, there was the brown nylon ditty of the seventies.  Equally modern in style, and although not split in two, it did have a matching chair.  The plastic was replaced with fitted slip covers and loose coverlets.  First there was the brown and orange floral patterned coverlet with the fringed edge.  This was draped over the couch like an oversized table cloth.  It was awkward and never stayed properly tucked.  Ma replaced this with a snug fitting gold slip cover that almost looked like it was tailor-made for the couch.  Except when it shrank and no longer covered the cushions fully.

One year, my sister gave Ma a cozy harvest gold mohair throw that was perfect for snuggling under in the evenings, especially during the long cold winter months.  It also looked marvelous draped over the back of the gold slip-covered couch, adding a tone on tone decorative embellishment.  Practicality aside, the slipcovers and coverlets provided a fresh look without having to splurge on an entirely new couch.  Ma loved to experiment and change things up but we were not a family who could afford such whimsy.  So in typical Ma fashion she used her creativity to fill the gaps where her pocketbook was lacking.

Sleepy time on the brown couch with the gold slip cover.

At some point in the eighties Ma went “colonial” with her decorating scheme.  This meant everything had a casual country feel.  Veneer coffee and end tables were replaced with ones made of maple or pine.  The couch to match was large and tweedy.  Warm and earthy in orange, rust and brown. By this time Ma had fully embraced her “orange” period.  The floors were covered in wall to wall orange carpets and the front picture window was ablaze with orange flowered drapes.  Until then she had been dabbling with hints of orange in the coverlets.  But the eighties brought a full-on immersion into this joyous and ebullient color.  It was in this palette that she would remain until her dying day.  She was after all, a fiery and passionate Italian woman. 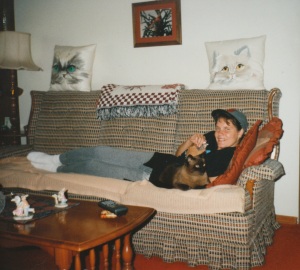 My niece cuddles with the cat on the tweed couch.

Regardless of the style, color or era, the purpose of these couches was always the same.  We were a family of loungers and languishers. Loafers and lollers. Sprawlers and slouchers.  And there was no better place for such a pleasurable pastime than Ma’s couch.  Nothing more welcoming and enjoyable than stretching out under a warm homey blanket, with the television six feet away broadcasting your favorite comedy or tear jerker.  And in our family the odds were, you’d be dozing off within minutes of the opening theme song. It was just the way we were. There we would remain. Sometimes we’d snooze for a few minutes.  Other times it was a few hours.  There was just something about Ma’s couches that induced sleep.  Something so deliciously reassuring and safe that sent us all off to La La Land. It didn’t matter if they were maroon or plastic covered turquoise.  Gold slip covered or orange tweed.  They all had the same affect.
No matter how long we’d been away. No matter how far we had ventured from 204.  Regardless of our age.  Child and grand child alike.  We all gravitated towards the couch.  Called dibs when it came time for bed during visits and holidays.  Everyone wanted to camp out on Ma’s couch.

The Old Man resting on the tweed colonial.

Years ago when I set up my first writing room in our home, one of the “must-haves” was a couch.  I wanted a private place to curl up and dream, sip tea, read novels, play my guitar, chat with a friend or take a snooze.  A comfy spot that was away from the rest of the household.  I not only wanted a room of my own, but a couch as well.  A big chair just wouldn’t do.  It had to be a couch.  It wasn’t just a piece of furniture after all.

My sanctuary.  My safe haven.  My hideout.  My shelter in the storm.  Ma’s cradling arms.

On the night after Ma died I sought refuge there.  The house had been full of people all day.  Our family had gathered to grieve and share memories.  We made frozen pizzas.  By seven o’clock that evening my head was pounding and my heart was aching.  I was raw.  Empty.  My soul was naked.  So I retreated.  Stole away from the chatter and tears to my safe place.  The couch in the little room of my own.  I crawled under the wool blanket and lay in the dark.  Everything was perfectly still.  My eyes were squeezed shut in pain. I listened to my heartbeat.  It was out of sync.

I wondered where Ma was.  I prayed that she was on an orange tweed couch sleeping peacefully under a mohair blanket.

2 thoughts on “Diaries of The Breadman’s Daughter: I am a Couch Potato.”