We loved to sit on our front porch in pedal pushers.

I like countdowns.  Especially ones that lead up to a happy event or special occasion.  Like Christmas.  The birth of a child.  A wedding.  On New Year’s Eve I like to watch the ball drop in Times Square.  All that glittery optimism and brilliant expectations for the year ahead.   A fresh new start in ten New York seconds.  Which could be 11 or 12 in the rest of the world given the speed with which a New York second passes.  Regardless, it’s out with the old.  In with the new.  A reason to celebrate.

Even though it’s been decades since I was in school, one of my favorite countdowns still remains that to the start of summer vacation.  There’s nothing else quite like it.  For me, it even trumps counting the days until Christmas. Despite all the caroling and egg nog drinking.  There’s no strings attached.  Just easy breezy eagerness.  And the joy of looking forward to lingering carefree days and laid-back leisure time.

Gretchen Rubin in her marvelous book “The Happiness Project” talks about the four stages of happiness, with the first one being anticipation.  This notion really resonates with me.  Because it goes hand in glove with countdowns.  As I am counting down, I am also anticipating and picturing that some kind of wonderful about to take place.  This in turn releases a bucketful of endorphins.  And those make me grin like a five year old coveting an ice cream cone covered in sprinkles.

Little back story.  The last month of school was both terrific and torturous.  By June in Northwestern Ontario, summer had fully arrived.  No longer lurking around the corner.  It’s presence was fully felt.  From the early morning dew to the humidity that blanketed everything long after the sun had set.  The heat was relentless.  Refusing to retreat.  Even in the darkest hours under a cheddar colored moon.  It was ever present.  And after a long cold winter, we welcomed it with open windows and screens on our doors.

This time was torturous because no one wanted to be there.  Not even the teachers.  Everything you really needed to know was already behind you.  If a teacher was bold enough to introduce something new, no one was listening.  We were a clowder of cats.  Completely disinterested.  We may have seen her lips moving but we heard nothing.  Attention spans were short.  And the intake valve to our brains even shorter.  There was no way anything education related was crossing the threshold to our brains.  Being inside was unbearable.  Being inside a classroom even worse.  The sun was shining.  The birds were singing.  The flowers were blooming.  We were all itching to get outdoors and be a part of it.

The fantastic part of that last month was the relaxed easy-going attitude of everyone.  The teachers did their part.  Classroom windows were flung open wide to allow summer in.  The sweet smell of heat infused with intense humidity, the divine scent of freshly mowed lawns and ubiquitous odor of freshly tarred roads settled over our desks, the blackboard, the books, the collection of potted pea plants on the windowsill.  It was a potent elixir that made us all positively giddy with happiness.

I like to see the world upside down and with a split.

In high school every opportunity to be outside was embraced. It was a time to start working on the tan.  The goal was to be beach-ready when the final bell tolled.  Lazy lunches and spare classes were spent languishing on the grass.   P.E. classes were all about the outdoors.  It was track and field season and whether you liked it or not you were out there.  Running or dragging your butt around the track. Horse laughing with your friends.  Good nature teasing.  Disgusted by the sweating.  Complaining at every turn.  But secretly loving every moment. 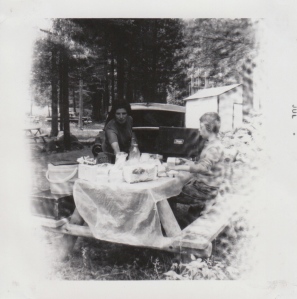 Breakfast at one of the campsites on our Circle Route trip.

I don’t think Ma and The Old Man counted down the days until my school year ended.  But they too welcomed the lazy hazy crazy days of summer.  Relished the longer days and warm evenings.  This meant more time for The Old Man to tend to his vegetable garden.  Or umpire Little League games after supper. More time for Ma to pause and relax with a cup of tea.  Go for walks or simply watch us kids play from our front porch stoop.

We weren’t big travelers.  Especially going anywhere that required a plane, train or boat.  But we did have an automobile. A Ford.  This was all we needed to get away.  The Old Man got two weeks off in the summer which was a big deal back then.  During that time we’d often go camping or drive down to Duluth for a few days of shopping and sightseeing. One time we went as far as Minneapolis.  And another time we drove and tented our way around Lake Superior.   Doing the Circle Route was considered quite the adventure to our family.  I’ll never forget the thrill of traveling the Soo Locks.  Another favorite summer pastime was driving to Sibley Park, Boulevard Lake or Chippewa for a Sunday afternoon picnic and swim.  Oh the picnics.  How we loved those.  Some planned and some spontaneous.  On muggy evenings, Ma would pack up a basket of food and we would drive to Boulevard to cool down and have dinner.   Who needed a pool or a summer cottage when one of the best places to swim and hang out was just twenty minutes from our house.  We were blessed.

It’s been said that the family that prays together stays together. That could very well be true.  But I also think that the family that plays together stays together.  At least that seemed to be the case for ours.  Especially in the summertime.  Everyone just seemed to get along better.  A bit like the way we were around Christmas time.  Only the rosy glow lingered.  For two solid months our spirits were raised and uplifted.  Happiness hovered in the clear blue skies over Lake Superior.  Washed over us in Boulevard Lake.  Splashed us from behind at Sibley.  Shone over the Sleeping Giant with a big yellow smile.  Echoed across Ouimet Canyon.  Shouted from the top of Mount McKay.  And giggled inside a tent pitched in the backyard at 204.

It’s June and summer beckons.  Calls me back to that place.  I count down.