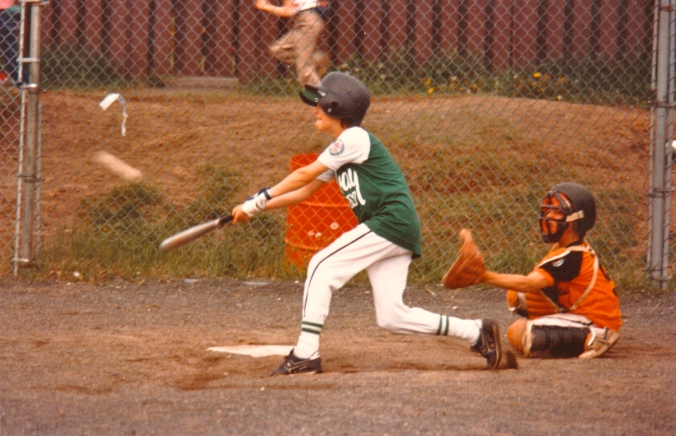 Hitting one out of the park.

I can feel it.  Spring is definitely in the air.  But even better, summer is just around the corner.  And with that notion comes all the paraphernalia of summer.  Lighter brighter sweeter clothes made from cotton and other carefree fabrics. Red toenails and colorful rubber flip flops.  The summer toys are brought out of the  basement, back shed or garage.  Things with wheels and pedals.  Things designed for the water and hot sandy beaches.  Games that are synonymous with sunshiny days and long warm evenings are played.  Racquets, bats and balls of all description.  This is the season when my favorite sport is played.  Baseball.

Let’s make something perfectly clear right up front.  I am not the athletic type.  Sporty Spice I am not.  I don’t gravitate towards playing team sports of any sort.  I’m a loner when it comes to anything even remotely athletic.  Running.  Walking.  Yoga.  Skip to my Lou. That’s about as close as I get to being an athlete.  But there’s just something about baseball that I like.  And I think it has something to do with The Old Man.

Little back story.  I never thought of The Old Man as terribly athletic either.  Despite what the black and white photos of his younger self reveal.  I only recall a man with a round girth and skinny white bowed legs.  But he did love sports.  In particular, hockey and baseball.   Back in the day, when homes had one television set, Saturday nights were  Hockey Night in Canada, and nothing but.  You could always count on him to be sitting front row and centre, glued to the television set for the two solid hours the game was televised on the CBC.  A bag of Old Dutch potato chips, sour cream and onion dip, and a large bottle of Pepsi at his side.  It was loud.  Raucous. And grating on the nerves.  Ma would often busy herself in the kitchen.  Some Saturday nights I would take refuge in the bedroom I shared with my older sister, if she happened to be out for the evening.  Otherwise, I would sit in the living room in the cozy chair next to the fake fireplace and read.  It was like Ma and I were held captive for those two hours.  Prisoners of Hockey Night in Canada.  But in a strange way, I think I actually wanted to be close to The Old Man on Saturday Nights.  Figure out a way to share his passion and excitement for the game.  Or maybe I just wanted some chips and dip and a tall glass of Pepsi.

Four things came out of those Saturday night sessions with The Old Man.  A lifelong craving for junk food.  A preference for Pepsi over Coke.  An ability to block out ambient noise.  And a love for reading, especially fiction.

On Saturday nights, while lost in a book, I learned to filter all those shrill sounds, the extraneous racket and cacophony blaring from the television set.  I retreated to the world of make-believe and fiction.  I became a mental escape artist.  A cerebral Houdini.  This ability has served me well over the years.  It has been particularly helpful when working in open-concept environments where you can hear everything and everyone. Including the pin drop.  But when necessary, I can press the mute button.  And hear nothing except the sounds within. I’m grateful for this gift, compliments of The Old Man and Hockey Night in Canada.  To this day, I hear the Theme Song and my mind goes to another place.  I switch off.

Baseball on the other hand, is a different game all together.  There is just something about the understated elegance of this sport that appeals to me.  Whereas the hockey nights were filled with shouting, cursing and bellowing at the television set, watching baseball was much more civilized.  Baseball wasn’t intrusive and never monopolized an entire night.  There was no such thing as Saturday Night Baseball, at least not back then.  Plus, during baseball season I could go outside and play with the neighborhood kids while The Old Man watched the game.  I wasn’t trapped inside a small wartime house in the dead of winter with nowhere to run.

Another redeeming quality of baseball was that there were no theme songs that involved a full-on brass section.  No trumpets blaring.  Drums pounding.  Chests beaten. The only baseball song I knew was Take me Out To the Ballgame.  That charming little ditty was universally loved, and whistled, for its sheer unpretentious and innocent hokey corniness.  That’s what I loved about it.  Then and now.

Music and civility aside, there are a few other reasons I preferred baseball over hockey.  First of all, it was warm when you played.  You didn’t have to wear tons of clothing and balance yourself on lace-up boots with blades.  A spontaneous street game could start right in front of your house, at any time on any given day. It was uncomplicated with straightforward rules. All you needed was a ball and a bat.  If you had a glove.  That was a bonus but not necessary to play the game.  And everyone was welcome.  Including girls. Today girls play all kinds of  team sports. But that wasn’t the case back then.

Aside from the friendly neighborhood scrub ball, I played on our school’s all-girl softball team.  I didn’t have to try out to make the team.  We all got in.  It was part of the grade eight P.E. curriculum.  Most of us weren’t very good.  But we enjoyed ourselves just the same.  We played against the other grade eight teams in our town.  And lost most of our games.  But that wasn’t the point.  What mattered was, we got to play.  There were some girls on the team who actually knew what they were doing.  And I recall we had a pretty good pitcher.  They admired them from afar.

I performed badly under pressure.  If I even caught a sniff that the opposing pitcher could actually throw the ball I was a goner.   And if it turned out they could throw like a boy I was dead in the water.  Struck out.  One, two, three.  I was okay in the outfield though.  It was pretty quiet and safe.  Not a lot of action but it offered an interesting outlying perspective.  Mostly I chewed gum and spat.  It was fun being a Tomboy.  And at the end, win or lose, it was glorious to be out there with the other girls playing this beautiful inclusive game.

The Old Man receiving his Bicentennial Medal for community dedication and service.

The Old Man shared his love of the game with me.  And it didn’t even necessitate consuming junk food.  For years, he had been deeply involved with Little League in our town.  In fact, he was one of the guys who got it started.  In 1984, in celebration of the Ontario Bicentennial Year, the Minister of Northern Affairs Leo Bernier awarded my father, along with 42 other folks from our town, a medal for Exemplary Community Dedication and Service.  The medal was given to me after he died.  I never realized at the time, the significance of his contribution to the game in our little town.  I never thought of him as the kind of guy who had a positive and worthwhile impact on the lives of others.  At least not to this degree. He was The Old Man for God’s sake.  A medal?  But now as I look at it, hanging from the red, blue and yellow ribbon, I am proud.  Very proud Dad.

I have fond memories of going to the ball field with The Old Man.  He used to Umpire the games.  I’d sit in the weather-beaten wood bleachers and watch.  Girls had come just far enough to be able to play ball at school and on the street, but not in the Little League.  There weren’t many fans or spectators.  Back then parents didn’t go to watch their kids’ games.  The boys would walk or ride their bikes to the field and play.  And when the game was over they took their gloves and went home.  It was so poetically simple.

I watched as The Old Man leaned in behind the batter at home plate.  Proudly wearing his Ump’s mask and black vest.  To me, he looked just like the real thing.  A pro.  This was a whole other side to him that we rarely saw.  He was confident. Tough. Spirited. And oddly athletic.  This experience was nothing like the Saturday Night in Hockey nights.  It was the complete opposite.  I was fully engaged in the game.  Lost in the warm sunny evenings.  The smell of dusty canvas base bags and chalk powder.  Green grass and young boys covered in dirt stains and glowing sweat.  Snap.  Crackle.  Pop.  Wood on leather.  Cheers and shouts.  You’re safe.  You’re out.  Strike.  Ball.  Batter up.  Batter out.  Loss.  Or victory.  Always good sportsmanship.  Handshakes all around.  Better luck next time Buddy.

The last game I remember going to with The Old Man was during the summer between grade eight and high school.  Everything changed after that.  He continued to umpire games for years afterwards.  In fact, the same year that he received the Bicentennial Medal, my first marriage ended.  Badly.  I was a hot mess.  And that’s putting it politely.  We separated in April and by May I had packed up my two kids and travelled a thousand miles  to that little wartime house in the west end of town.  Ma and The Old Man welcomed us with open arms, unconditional love and above all no judgement.

It was the start of Little League Season when we arrived.  My son, who loves sports just like his grandfather, embraced the idea of playing.  The Old Man got him onto a team, and what could have been the worst of all possible summers, was made enjoyable by his participation in this sport. 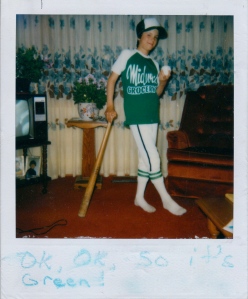 All decked out in his green and white uniform and ready to play.

I don’t remember a whole lot about that summer.  Some memories are better left unearthed.  But I do recall going to watch one of my son’s games and thinking how marvelous he was.  How he looked like the real thing in his little green and white uniform.  A pro.  Just like his grandfather.  Then I remember how grateful I was to The Old Man for taking him under his wing.  And for putting some fun into a young boy’s  summer.  I was also grateful that The Old Man got to do something with my son that he was never able to do with me.  Umpire one of his games.

Footnote: My son told me today that he remembered two things about that baseball summer with his Grandpa.  He hit a home run out of the park.  And his grandpa called him safe at home when he was obviously out.  I love that The Old Man couldn’t be impartial when it came to his Grandson. I think he was that way when it came to me as well.

2 thoughts on “Diaries of the Breadman’s Daughter: Take Me Out to the Ballgame.”