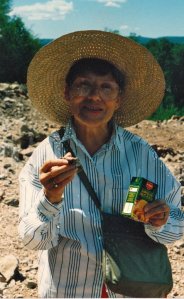 When my mother died two things happened.  First, I lost one of the people who were most dear and precious to me.  And second, she didn’t leave me with any words of wisdom regarding the “meaning of life and why we’re here.” She didn’t uncover any big secret during her life and impart that to me on her deathbed.  No, instead Ma, my daughter M and I played “I Spy with My Little Eye” on what would be the eve of her departure to God knows where.  We laughed at the grey wall.  I never knew it was her last night. I thought there was still time for her to cough up some tidbit that would help me understand what this thing we call life is all about.

I realize unearthing the meaning of life is a huge topic and probably an impossible burden to have placed on my sweet Ma, especially at the end of her life when she was so terribly ill but in my defense, she was a wise woman and I just assumed she would say something that I could hang onto for the rest of my life.  Put an end to all this seeking and just sail on through without any effort or care until we hooked up in the great Hereafter. I mean it’s only fair.  She was my mother for God’s sake.  She was supposed part with something really great, incredibly profound and comforting that would explain my purpose for being here.

Ten years later, I still grieve for Ma.  Not the way I did initially but I think of her daily and every now and again I am overcome with sadness and I cry.  These sudden spurts of emotion are random and always unexpected.  I can pass a photo of her every day for months and not think too much about it and then one day out of the blue I’ll see the photo in a completely different way, as if for the first time, and I start to cry.  Like a baby.  Inconsolable sobbing. Snot-faced and red-eyed ugly.  It isn’t just a photo that can reduce me to tears either.  Anything can trigger it: an elderly woman with veiny hands and long piano fingers examines a mango in the grocery store; a baby in the park with dark chocolate eyes glances my way; a dog barks in the dead of night; a piece of pie in the fridge looks cold; a fallen leaf forlorn; a rock; a bird; a plane, a hat.  Anything can set me off really.  There’s no rhyme.  And there certainly is no reason.

Why does this happen?  What is it about this random, seemingly unconnected stuff that reminds me of Ma and touches my heart so deeply.  Maybe because it isn’t so random after all.  And it is connected.  All of it.  To Ma.  To me.  To you.  To God.

As it turns out, I did learn something profound through that whole journey of Ma getting ill and ultimately dying.  This probably shouldn’t have been the epic revelation it was but I can be a little dim sometimes.  Anyway, here’s the thing: it wasn’t Ma’s job to tell me the meaning of life, nor answer the big question of why we’re here.  That wasn’t her responsibility.  It’s mine. This is all part of my quest, my journey.  Her’s was entirely something else.  Between her and God.  None of my business.  And maybe she did know something and wouldn’t tell me because by doing so she would have robbed me of the chance to figure this out on my own.  What greater gift.  Ma was wise.